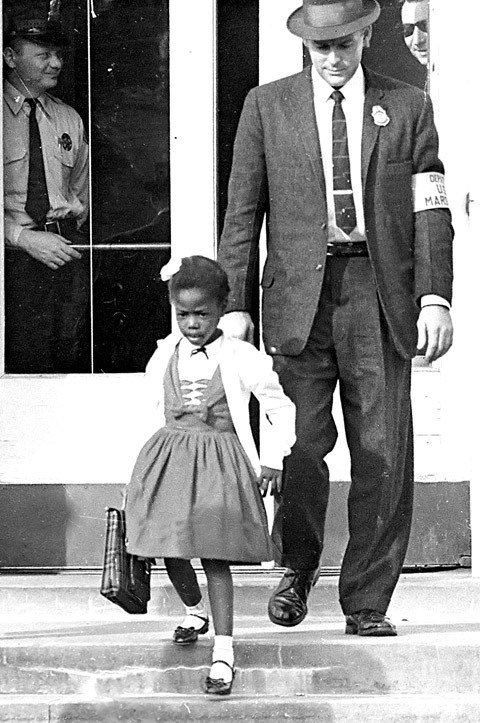 A difficult concept for me to sometimes understand is what it looks like to “love my enemy.”  It is a command of Jesus to his followers that doesn’t come naturally to me. I think I naturally want to protect myself from my enemies rather than love them.

We live in a culture today that is many times filled with hatred for those we oppose. When we think of the recent election, it doesn’t take long to see that many of us had hatred for our opponent, whether Republican or Democrat.  It is in our nature to defend our views and beliefs to the point where we are barely treating those opposed to us as human beings, let alone people made in God’s image.  As a culture today, we are quick to dismiss those who are different than us and we become threatened by it. I can easily go to that place myself.

I recently watched a movie called Ruby Bridges with my family. This movie showed me a tangible example of what it looks like to love your enemies in the face of hatred.  This example helped the message sink a little deeper into my soul. The movie Ruby Bridges was made by Disney in 1998. This film is about the true story of Ruby Bridges. Ruby was the first black girl to attend an all white school in 1960 in New Orleans. Ruby was six years old.  She and her mother were escorted by four federal marshalls to school for a whole year. The movie shows the very first day she was escorted by herself to school. White people were yelling, cussing, spitting and treating this little girl in a way that was less than human. They were even threatening to kill her.

A psychologist was hired to observe how this horrible trauma would affect this young girl. He continued to be astounded by her “normal” behavior at school. She was happy go lucky and always ready to play. This behavior didn’t make sense. He asked her what she felt towards the people who were treating her this way and she told him that she prayed for them every morning. The psychologist said, “Ruby, why would you pray for them?” She responded by saying, “well, don’t you think they need prayer!” He asked what she prayed and she said she prayed, “Father forgive them, they don’t know what they are doing.” The man was then speechless and humbled and amazed at the character of this young girl.

The only possible way to explain how this happened is to know that Ruby was filled with the comfort and protection of the Holy Spirit. The way she responded to such a traumatic, hellish experience was supernatural. It reminds me of the verse in Exodus 14:14 that says, “the Lord will fight for you, you only need to be still” as well as the verse Joshua 1:9 that says, “Have I not commanded you? Be strong and courageous. Do not be afraid; do not be discouraged, for the Lord your God will be with you wherever you go.”

This little girl’s prayer was the prayer of Jesus on the cross. As Jesus was literally being killed on the cross, Jesus cried out, “Father, forgive them. They know not what they are doing.” It is a reminder that Jesus is pure love. There is no hatred in him. This stands in such opposition to what my heart often  feels.  My inclination in the face of opposition is to want to lash out, and give back what I am getting. Jesus points to another way.

As we honor Good Friday, I am reminded how I always wanted to call this day Bad Friday. The bad is that Jesus had to die in such a horrific, tragic way. The good is that out of Jesus’ love for us he chose to provide a way out of sin and death. The bad for Ruby is that she had to endure such pain and suffering and injustice. The good for Ruby was that she didn’t let evil win out. And, because of her love and forgiveness, light shone into the darkness. Ruby helped change history.

In a day and age where it is hard to find people to look up to, it is nice to know about people like Ruby.  She is now one of my heroes. I am humbled by her courage and dependence on Christ. Ruby’s courageous testimony helps point the way for the rest of us. Through seeing a real life example of love at work in the middle of a hateful environment, especially in one so young, I understand a little better what it means to love your enemy.  This unworldly approach of loving your enemy really does open the way for transformation, healing, justice, and peace, reflecting the very heart of God.